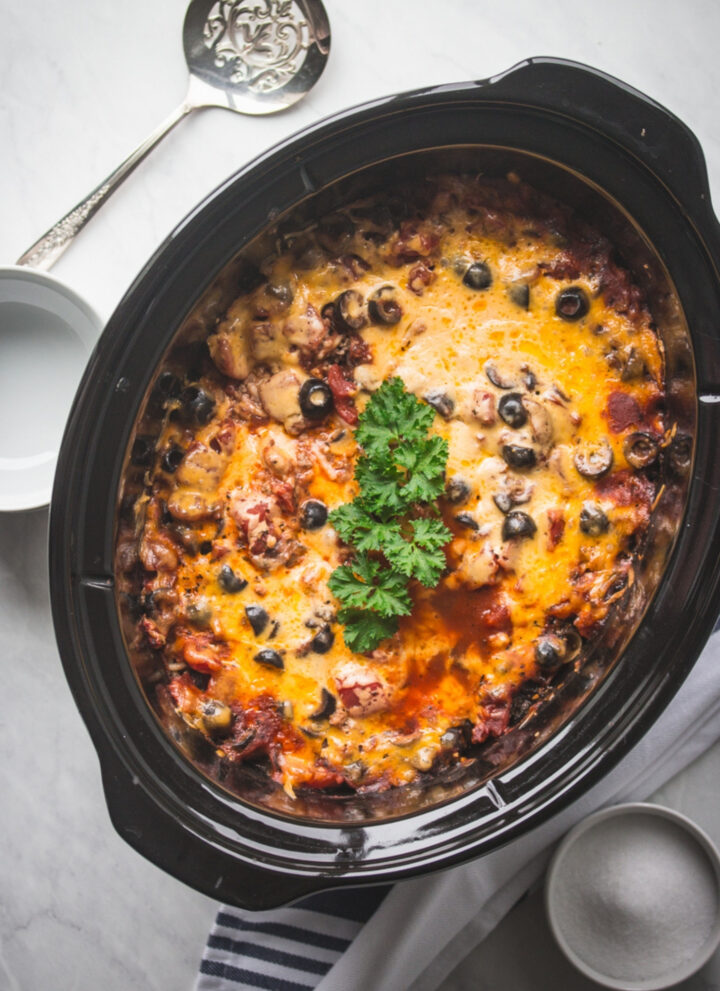 This easy recipe for gluten free slow cooker spaghetti is made in your crockpot with hamburger. This healthy recipe is made with olives and layered with ground beef. It is a cheesy and quick meal that you can make ahead.

I know I cook for a living, but some days I don't feel like making dinner. I think it is a reality for most of us no matter what you do for a living. In my single days I would have had a bowl of cereal and a yogurt for dinner. When I first met my husband he thought I had lost my mind. He doesn't think it's dinner if it doesn't have meat as an ingredient.

This recipe is perfect to throw together quickly and let it slow cook all afternoon. Often I put this together during my lunch break and then dinner is waiting for us.

How do I make gluten free slow cooker spaghetti?

Good gluten free spaghetti noodles are key! I really like the Jovial Brown Rice Spaghetti Noodles. I think they taste the most like what I remember regular spaghetti tasting like. They hold together really well also.

These noodles are perfect if you can't have corn products too. I love that they are simply brown rice and water.

I layer the meat, onion, garlic and sauce mixture into the bottom of the slow cooker. Then I break up the spaghetti noodles into thirds and spread them into a layer. You don't want to leave them clumped together or they will stick together. Then I add the rest of the sauce and meat mixture. Finally, I top everything with a layer of cheddar cheese.

Does gluten free pasta have eggs?

The Jovial Brown Rice Spaghetti Noodles does not have eggs in the ingredients. I've also used the Trader Joe's brand, the Great Value Walmart brand and the Barilla gluten free pastas. None of these have eggs.

It is always key to read the ingredients each time you purchase pasta. I've been disappointed before to get home and realize they've changed the ingredients on some of my favorite gluten free products.

This easy recipe for gluten free slow cooker spaghetti is made in your crockpot with hamburger. This healthy recipe is made with olives and layered with ground beef. It is a cheesy and quick meal that you can make ahead.

In a frying pan cook the ground beef until there is very little pink left. Add the onion and garlic. Sauté until the onion is just starting to become tender and translucent.

Pour the rest of the beef mixture over the noodle pieces. Then pour the spaghetti sauce mixture over all of this. Top with the cheddar cheese.

On the Low setting on your slow cooker cook for 3 hours.

The slow cooker spaghetti is done when the noodles are tender. 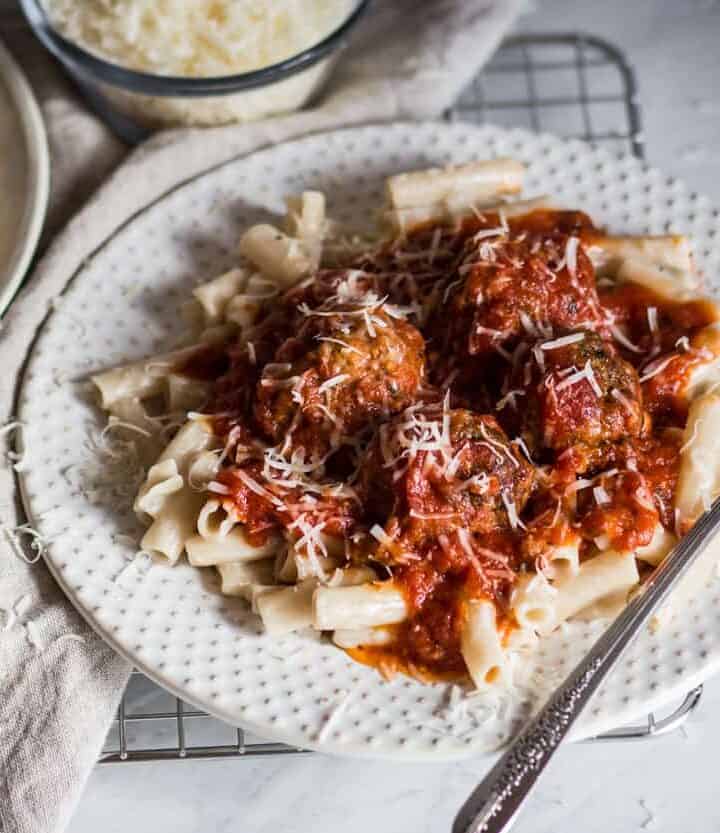 I love a good slow cooker recipe. There is something so freeing about knowing dinner will be ready that night. I don't always remember to make dinner when I get busy so this is perfect for me to set and forget.

I used brown rice crumbs in the place of bread crumbs for these gluten free meatballs. I like to get my rice crumbs at Trader Joe's, but there are options on Amazon also.

You can also get gluten free bread crumbs from Amazon and in some grocery stores. Those would also work for this recipe. The crumbs help hold the meatballs together, so they are needed.

How long do gluten free meatballs cook for?

I cook this recipe on low for three to four hours. Exact time will depend on your slow cooker. After three hours you can check them. The sauce should be bubbling and the meatballs should be browned on the outside.

I don't suggest cooking them on high because they will burn on the outside and may not get cooked all the way through. Be patient with the low setting so you don't have meatballs that are raw in the center.

Begin making the meat mixture into golf ball sized meatballs and placing them into the slow cooker. Once all the meatballs are in pour the rest of the marinara sauce overtop. 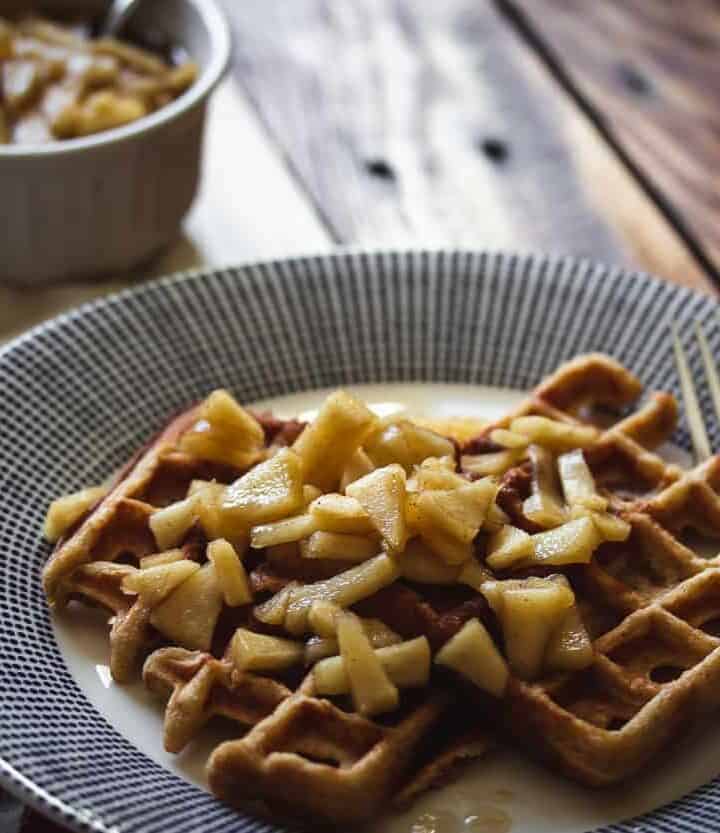 This healthy recipe for gluten free applesauce waffles with apple topping is an easy, homemade breakfast. The delicious recipe has cinnamon and almond flour.

I love breakfast food. When I went gluten free a few years ago breakfast was the first thing I worried about. At first I thought I would be eating eggs and never again get to indulge in waffles. Thankfully, I was wrong!

These Applesauce Waffles with Apple Topping remind me of apple fritters. I like to cook the waffles until they have browned and are slightly crispy. This is important because if you take the waffles off the griddle too soon they will be soggy and you won't get that delicious crispiness.

I mix up the batter for the waffles and begin cooking them first. Next, while I'm cooking waffles in the griddle I begin peeling and chopping the two apples needed for the topping.

By the time I've gotten the five sets of large waffles cooked the apple topping is lightly boiling on the stove to cook the apples down and brown the ghee.

I suggest serving the waffles and topping immediately while they are still hot. These apple sauce waffles and apple topping are a delicious way to start your day!

Can you substitute applesauce for oil in waffles?

Yes! It works perfectly and reduces the calories of the waffles. If you don't have a nonstick waffle maker you will still want to use a bit of oil on the waffle maker so your waffles don't stick to it.

How do you make gluten free waffles from scratch?

Waffles are really easy to make. They are as simple as beating all the ingredients together in a mixing bowl and then pressing in a waffle maker. I like to use a handheld mixer so that I get all the lumps from the flour out and have a really well mixed batter.

These Applesauce Waffles with Apple Topping are a delicious way to start your day. You could make the batter the night before and enjoy hot waffles and topping in the morning.

Waffles:
Combine all ingredients into a mixing bowl. I like to use a hand mixer to get a nice, lump free batter. Beat on medium-high until the batter is smooth. The batter should be fairly runny.

Apple Topping:
Cook ghee, apples, sugar, honey, and spices on medium heat until the apples are tender. Add maple syrup and heat through. Serve immediately over waffles. The topping can be stored in the fridge for a couple of days and reheated if needed.

I like to make a double batch of these waffles and then store them in the fridge. I pop them in the toaster to reheat and have easy weekday breakfast.

“We are a participant in the Amazon Services LLC Associates Program, an affiliate advertising program designed to provide a means for us to earn fees by linking to Amazon.com and affiliated sites.”