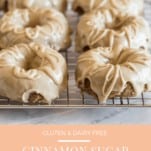 There are things I miss living a gluten-free lifestyle and donuts is one of them. These gluten free cinnamon sugar baked donuts are super delicious. The glaze is also seriously yummy!

The glaze doesn't have maple syrup in the ingredients list, but tastes very close to a maple bar. One warning though, this glaze needs to be used while it's warm or it will harden and be impossible to work with. Prepare the glaze when you are ready to frost the cinnamon sugar baked donuts. Be sure to use the glaze fairly quickly.

The cinnamon sugar gluten-free donuts can be stored in an air tight container up to a week. Gluten-free donuts are perfect with a cup of coffee or tea and will be on heavy rotation at our house this Fall.

Baked donuts have a cake like texture. Since they aren't deep fried they aren't crispy, but are soft and dense. I like baked donuts best with frosting.

Can I freeze baked donuts?

Yes! You can definitely freeze baked donuts. I would freeze them without frosting and frost them later. Frosting will break apart and fall off the donuts in the freezer.

How do you get the donut batter into the pans?

First, make sure you've greased your donuts pans with butter or coconut oil so the donuts come out of them easily.

Spoon the gluten free cinnamon sugar baked donut batter into a gallon plastic bag. Snip the corner of the bag with scissors. Press the batter out into the donut pans like you are frosting a cake.

This method will allow you to get nice circles into the donut pans. I've also tried spooning the batter into he donut pans, but it's time consuming, messy and you don't always get a nice donut shape.

Are cake donuts the same as baked donuts?

Yes. Baked donuts are made with a cake type recipe that will rise in a donut pan in the oven. They aren't fried like donuts you may purchase from the store.

Skipping the frying makes baked or cake donuts a healthier option. They still have a great donut flavor, but with fewer calories. Plus there isn't an oil mess to clean up either.

If you liked this recipe you might also enjoy:

I get a lot of my ingredients from Thrive Market. Thrive Market has been a game changer for me eating gluten free. They have so many options I can’t get at my rural grocery stores! Use this link to get 25% off your first order!

If you don't have a baked donut pan I like this one: Wilton Donut Baking Pan

These gluten free cinnamon sugar baked donuts are really easy to make. This recipe allows you to make homemade donuts without having to fry them. The maple glaze is delicious too!

Place sugar, apple sauce, almond milk, vanilla, eggs and coconut oil in the bowl of a mixer and blend together.

In a separate bowl combine flour, baking powder, xanthum gum, sea salt, cinnamon and nutmeg. Stir together and then slowly add to the wet mixture. Blend all ingredients together until smooth.

Bake donuts for 18 minutes or until they are golden brown and spring back when you touch them.

Let donuts stand for 10 minutes and then remove from the pans. Let cool completely before glazing.

To make the glaze heat the brown sugar, butter (or coconut oil), and apple juice on medium heat until melted together. Add these melted ingredients to the powdered sugar and beat until smooth. Use this glaze immediately! If you let it stand for too long it will harden and you won't be able to get it on the donuts. If this happens you can reheat the glaze over a water bath on the stove top.

For a dairy free version replace the unsalted butter with coconut oil in the glaze.

If the glaze hardens reheat it over a water bath on the stove top until it is spreadable.

“We are a participant in the Amazon Services LLC Associates Program, an affiliate advertising program designed to provide a means for us to earn fees by linking to Amazon.com and affiliated sites.”